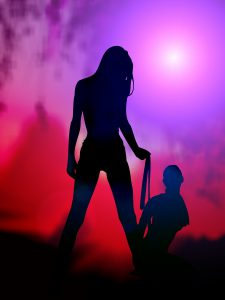 There are a variety of reasons; some get off on the humiliation of not measuring up, others love watching their partner be with someone else for the voyeuristic aspect. Even within those two generalities there are subsections as well, such as the idea of being coerced into it by their partners, the racial undertones that can sometimes be associated with the fetish, the “surprise!” of finding out your partner has been cuckolding you all along, and even the added emasculation of feminization to add to their shame. It’s not just about the voyeurism (more than half don’t get to watch), but an underlying message of “You aren’t good enough.” For those who enjoy power exchange, that message is incredibly arousing. It instantly emasculates the man and continues to drive the point home with every instance of infidelity. It’s the real diamond being dangled in front of a Valkyrie … or the Twinkie on display in front of a kid that loves candy.

What kind of partner does this?

The kind that loves the man in their life, typically. Cuckolding is not about degradation so much as it’s a unique expression of love between two people. You have to have a stable relationship and a clear understanding of what each wants from the experience before you dip your toes in. This is not something for the average married couple looking to “spice things up.” Some couples try this and find it’s really not their cup of tea (some fetishes should remain fantasies), while others embrace it and take it on as their new normal. Female-led relationships are a cousin to this lifestyle and are sometimes spawned by an interest in cuckoldry.

So now you know … it’s romantic, but only to those that truly understand the dynamic. The only ridiculous thing is judging what someone else does in their bedroom.

We use cookies on our website to give you the most relevant experience by remembering your preferences and repeat visits. By clicking “Accept All”, you consent to the use of ALL the cookies. However, you may visit "Cookie Settings" to provide a controlled consent.
Cookie SettingsAccept All
Manage consent

This website uses cookies to improve your experience while you navigate through the website. Out of these, the cookies that are categorized as necessary are stored on your browser as they are essential for the working of basic functionalities of the website. We also use third-party cookies that help us analyze and understand how you use this website. These cookies will be stored in your browser only with your consent. You also have the option to opt-out of these cookies. But opting out of some of these cookies may affect your browsing experience.
Necessary Always Enabled
Necessary cookies are absolutely essential for the website to function properly. These cookies ensure basic functionalities and security features of the website, anonymously.
Functional
Functional cookies help to perform certain functionalities like sharing the content of the website on social media platforms, collect feedbacks, and other third-party features.
Performance
Performance cookies are used to understand and analyze the key performance indexes of the website which helps in delivering a better user experience for the visitors.
Analytics
Analytical cookies are used to understand how visitors interact with the website. These cookies help provide information on metrics the number of visitors, bounce rate, traffic source, etc.
Advertisement
Advertisement cookies are used to provide visitors with relevant ads and marketing campaigns. These cookies track visitors across websites and collect information to provide customized ads.
Others
Other uncategorized cookies are those that are being analyzed and have not been classified into a category as yet.
SAVE & ACCEPT